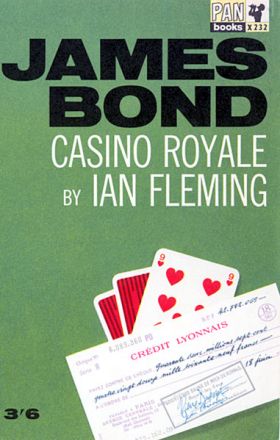 We have a lovely autumn here in Freiburg. Since the wakeboarding circuit has closed down, I’ve taken to bicycling on weekend afternoons. And I usually listen to audiobooks – distracts me nicely while I sweat uphill.

Decades ago, I collected the full set of Ian Flemings Bond books. In addition I have Casino Royale, the first Bond novel, as audiobook, which I listened through today. I also used to enjoy the movies. Skyfall is currently all-in (and I haven’t seen it, probably won’t). The Broccolis’ (the producer family behind all the movies) have mounted a full media attack, you see comments everywhere. And recently I read a scathing article on the books, decrying them as most sexist.

What seems not widely known: there is a vast difference between the books and the movies. I consider the books actually as good literature. And the storyline of the movies has little to do with the books, sometimes blending several books and adding lotsa’ fancy additions.

When I read that scathing article, severely dressing down Fleming’s novels, I felt a bit guilty “did this fully escape me”? But after hearing Casino Royale today again, I strongly disagree. Of course it’s a mainly “man thing”, but the woman is largely treated as partner. In fact in that novel it’s Bond’s intention to marry her (and I will not spill why that doesn’t come about). In a later book (can’t recollect right now which one), Bond is actually married. [Of course marriage does not negate machismo; but it’s at least different from treating girls as throw-away toys.] There’s more: Bond is reflective. While initially acting like a machine “right or wrong, my country”, there later is a lengthy piece on change in the world and that allegiances morph, and that good guy / bad guy can meld and may not be easy to tell apart. In the end, of course, his thoughts are “shipshape” again, but there is no trivial happy end.

The short of it: Bond novels are highly entertaining and no trash literature. But: they are children of their time.

Finally – I just searched through my entire collection (in addition to the books, I have them also as text files). The famous “shaken not stirred” phrase is real, I found 2 occurrences: