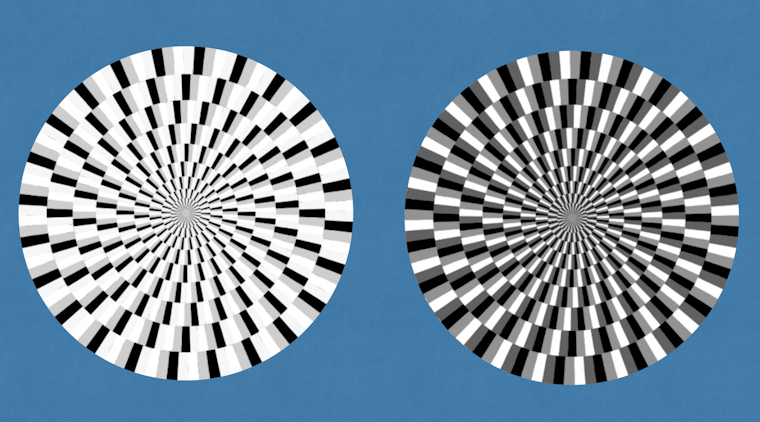 Typically I would not advertise my scientific publications here, but I’m particulary proud of this paper “Rotating Snakes #Illusion—Quantitative Analysis Reveals a Region in Luminance Space With Opposite Illusory Rotation” (Lea Atala-Gérard & Michael Bach, 2017): https://doi.org/10.1177/2041669517691779

The standard rule of thumb is: the disk rotates from the black part over the darker grey towards the white part, as seen in the right disk (clockwise). The left one, although having the same black–dark grey–white–light grey order, rotates ever so slightly the other way. This is only a wee bit of rotation, but was totally unexpected. The luminance effect can be interactively explored here

One needs to do eye movement beneath the figures to perceive the effect – steady fixation leads to steady disks. For me the rotation of the right disk is so strong that I need to cover it to see the occasional counter-clockwise rotation of the left disk.

We also, in the spirit of open data, have published our full data set on figshare. The data demonstrates that there is variability between observers. By using a nulling task (physical counter-rotation to make it seem stationary), quantification of effect strength was highly reproducible.